Montgomery Victory Gardens was a leader in the campaign for a new MCPS policy allowing vegetable or edible gardens in the county’s public schools, organizing more than 30 community groups, along with press coverage and public opinion, to bring about the change. The new policy was enacted in February of 2011.

Since then, MVG worked with colleague organizations to help establish school vegetable gardens, and in 2013 we undertook the first comprehensive survey of existing gardens, completed in August, 2013.

Read press coverage on the survey release here and here.

If you would like to see a copy of the school garden survey, start a veggie garden at your school, or otherwise get more involved in this critical food growing and education effort, please drop us a line at info@montgomeryvictorygardens.org!

Bees are a foundation of our natural world, responsible for pollinating and propagating huge numbers of plants – including more than 1/3 of all the food we eat. Yet in the mid 2000’s a mysterious new affliction, Colony Collapse Disorder (CCD), began wiping out honeybee hives – last winter, some beekeepers lost 50% or more of their bees.

While there is considerable debate on the cause of CCD, two reasons have come to the forefront – habitat loss and pesticides.

Habitat loss is affecting animal species all over the planet, and bees have been critically impacted. Between industrial agriculture’s penchant for monocultures and the continuing spread of residential developments featuring lawns instead of native plants, bees have lost a tremendous portion of their food base, both in volume and diversity. However, this is one area where individuals can play an important role, and we encourage everyone to provide much-needed food for bees by planting bee-friendly flowering plants in your yards.

Increasing attention has also being paid to the role of pesticides in bee deaths, and in particular the group of insecticides known as neonicotinoids, which are now among the most widely used pesticides in the world. The European Union banned their use earlier this year because of the danger to bees, and numerous groups in the U.S. are increasingly alarmed over their widespread use here, so much so that several national environmental groups joined beekeepers in suing the EPA in early 2013 to force action.

While we follow the federal action on this issue, here are two more easy steps you can take to add your voice to help the bees: 1) join Friends of the Earth and click here to demand that mega home and garden retailers Lowe’s and Home Depot pull these be-killing pesticides from their shelves, and stop selling any plants pre-treated with them; 2) read the full page ad published in the NY Times and elsewhere by the new coalition Save-Bees.org – then go to their website and sign the petition requesting that the EPA place an immediate moratorium on the use of neonicotinoid pesticies.

There could be no better way to support healthy eating, food education, and support for local farmers than byincorporating more fresh, local food in the a la carte menus and 50,000+ meals served daily by Montgomery County’s 202 public schools.

To tackle this challenge, MVG was proud to team up with Real Food for Kids Montgomery to host the “School Food Forum: Creating a Vision of Fresh, Real Food in Montgomery County Public Schools” on November 2, 2013. The packed house of 150+ included many of the county’s elected leaders (see the online Forum flyer here for the full list of our Honorary Host Committee), and fantastic array of presenters including the MCPS Director of Food Services Marla Caplon and nationally-known school food reformer Tony Geraci, aka “Cafeteria Man.” (School veggie gardens were also discussed in some detail by Flower Hill ES PTA Vice-President Karla Kratovil and Sherwood HS Science and Horticulture Teacher Jill Coutts.) Check out our media page for news coverage of the event – and keep in touch for next steps!

Save This Soil – and Brickyard Education Farm

In early 2011 it was announced that Nick’s Organic Farm, a heritage organic farm that had operated in Potomac, MD for 31 years, was losing its lease – and the land being rented to the county to create soccer fields. 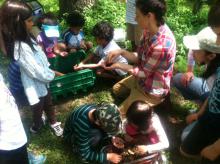 MVG has been part of the struggle to save this precious farm since then. In 2012 Brickyard Educational
Farm was established on the site, and an important victory was achieved in March 2013, when the County Executive’s office abandoned its plans for a soccer-plez and its claim to the lease.

Brickyard Education Farm is currently operating on an adjacent property while the campaign to site it permanently on the original farmland continues. Check out Brickyard Educational Farm to participate in their ongoing activities, and see the Save This Soil site for next steps in the effort to preserve Montgomery County’s oldest organic farmland.

The backyard chicken movement is sweeping through municipalities across North America. Chickens make great pets, and backyard chickens are the cheapest, cleanest source of eggs possible – especially when you consider the environmental and animal welfare horror show that is industrial egg production.

Montgomery County is in the process of revising its zoning code, and after initial suggestions by a planning committee to liberalize our county’s regulations on chickens some misguided opposition arose – and the issue of backyard chickens suddenly became a very hot topic, with a full 1/3 of all the public testimony (16 or 48 presenters) at the November 14 hearing on just this one issue (and virtually all of them pro-chicken!). We continue to work on the zoning code revision, which is still in flux, but in the meantime you CAN raise backyard chickens in Montgomery County – go to Montgomery County Backyard Chickens for the latest updates, and for great information if you are interested in raising chickens yourself.